Happy Holiday’s avid golfers! I hope that you are finding time for some great golf as you enjoy the holidays but as for those of us who maintain golf courses especially in the transition zone (Climate Zones 7, 8) we are very concerned about frost damage this time of year. While any turf can be damaged during frost, we are primarily concerned with greens especially Bentgrass greens. Perhaps there is no greater mystery associated with winter golf in the south than the dreaded frost delay. The frost itself is not the killer but traffic on the plant while frost is present is the problem, if the plant thaws naturally there is no risk, pushing to set up the course or allowing play is the issue. Therefore, the ask the superintendent question for December is, what exactly is a frost delay?

In the most basic of terms a frost delay is a suspension of all traffic on the turf due to frost, this includes maintenance activities. Even light foot traffic can cause damage to the turf. A frost delay is not popular, but it is quite common in the winter months. Everyone impacted wants to find the fastest way to get the course open while still protecting the turf. It is a delicate balance of watching, evaluating and waiting. Before we get into the science of frost it is important to point out again that the maintenance staff must also stay off the turf during a frost delay. Only when the frost has lifted can the maintenance staff begin setting up the course for play so tee times must be held off long enough for the staff to prepare the course for proper play. Patience is a virtue and as a golfer your cooperation during a frost delay is greatly appreciated. So, what exactly is frost?

The actual definition of Frost is when water vapor, or water in gas form, becomes solid. Frost usually forms or sets on objects like cars, windows, and plants (turf) that are outside in air that is saturated, or filled, with moisture. For our purposes, Frost is a thin layer of ice on the turf plant surface that forms from water vapor in an above-freezing atmosphere coming in contact with a solid surface whose temperature is below freezing and resulting in a phase change from water vapor to ice as the water vapor reaches the freezing point. Essentially the cells of the turf plant are eventually frozen. The danger is if you walk on the plant or have any traffic on the plant in its frozen state then the cells are broken (like cracking an eggshell) and can cause serious injury to the plant. If there is no traffic the frost will lift naturally causing no lasting damage to the turf. Frost damage usually appears as black splotches covering the entire leaf surface. Have you ever seen the blackened footprints left behind when someone ignores a frost delay notice and walks across a putting green? It is heart breaking. Even light frosts that are essentially frozen dew on the upper leaves of the turfgrass plants as the temperature approaches 32 degrees can still cause damage. This typically occurs close the coldest point of the night usually around sunrise (I have seen frost set up just after sunrise), or in golf course terms right when you would like to mow. As the ice forms on the plant, it begins to freeze the plant cells in the tissue of the turfgrass leaf.  This weakens the cells and makes them vulnerable. 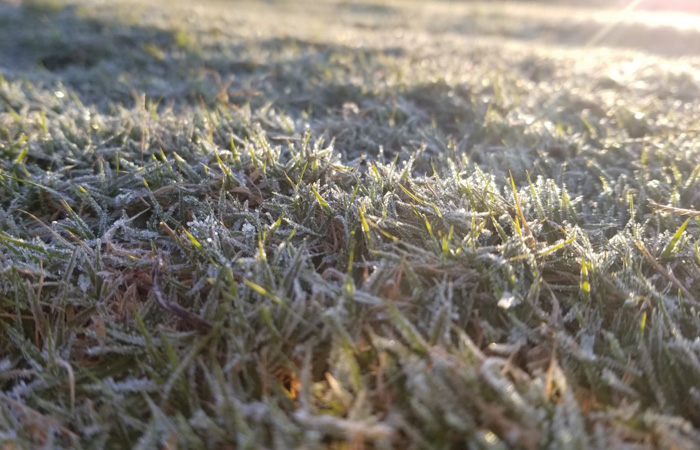 We predict frost at certain times of year using frost dates as a guide. A frost date is the average date of the last light freeze in spring or the first light freeze in fall. In the DFW area frost dates run from November 22 – April 22. Please remember that every year is different and these projected frost dates are generalities. In fact, frost dates are an estimate based on historical climate data and are definitely not set in stone. The probability of a frost occurring after the spring frost date or before the fall frost date is roughly 30% as projected by leading experts, which means that there is still a chance of frost occurring before or after the given dates. Frost dates are predicted by the National Centers for Environmental Information. Officially, frost is predicted when air temperatures reach 32°F (0°C), but because it is colder closer to the ground, a frost may occur even when air temperatures are just above freezing. Always keep an eye on your local weather forecast but be aware that weather, topography, and microclimates may also cause considerable variations in the occurrence. It is also very possible that portions of the course will have frost while other areas are frost free. Frost delays are usually issued for the entire course to protect all the green assets.  Shade is also a big factor in how long frost takes to thaw. Here are some temperatures as a guide to plant damage forecasts, a Light freeze: is 29° to 32°F (1.7° to 0°C) – tender plants are killed, a Moderate freeze: is 25° to 28°F (3.9° to -2.2°C) – widely destructive to most vegetation, a Severe freeze: is below 24°F (-4.4°C) – potential heavy damage to most plants and turf. 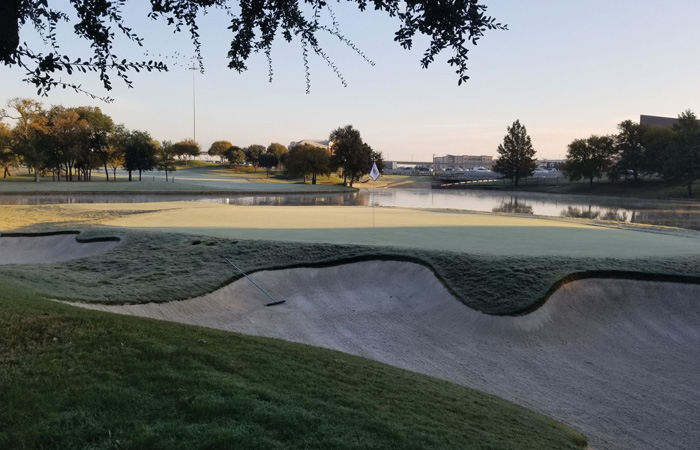 One practice that is commonly used to speed up frost thawing and shorten the duration of a frost delay is to apply a light irrigation cycle which contains water that is warmer than 32 degrees to melt off the frost and warm up the surface. The issue with this is that it must be timed properly to not form more ice and make the problem worse. The superintendent will apply the irrigation cycle when the conditions are favorable to be successful, it is not always an option. Some courses may use a shotgun start that is scheduled for later in the day after the frost has lifted/thawed. This strategy has merit if the course can be properly serviced before play begins. There are some course designs that can safely change the order of play allowing holes that are slow to thaw to be played later in the round. However, most courses will not allow any play until the entire course is safe in order to prevent golfers from accidently playing a frost covered area. Just remember that all of this is to protect the turf and allow for the best possible playing conditions. 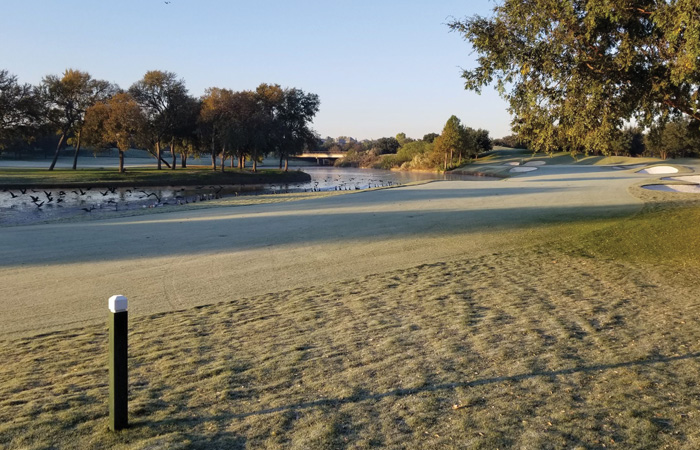 Frost delays are part of playing winter golf in the south. By watching the weather forecast and communicating with the course staff, especially the golf course superintendent you can minimize any inconvenience. We all love the game and strive to protect the green assets of the club any way we can so I hope these tips and explanations will help you enjoy more winter rounds at your favorite course. Keep reading AVIDGOLFER magazine and remember that on December 22, the day’s start getting longer.

Ask the Superintendent – What Exactly is a Frost Delay?

December 3, 2021
Let's Golf
Comments Off on What Exactly is a Frost Delay?
Golf Blog